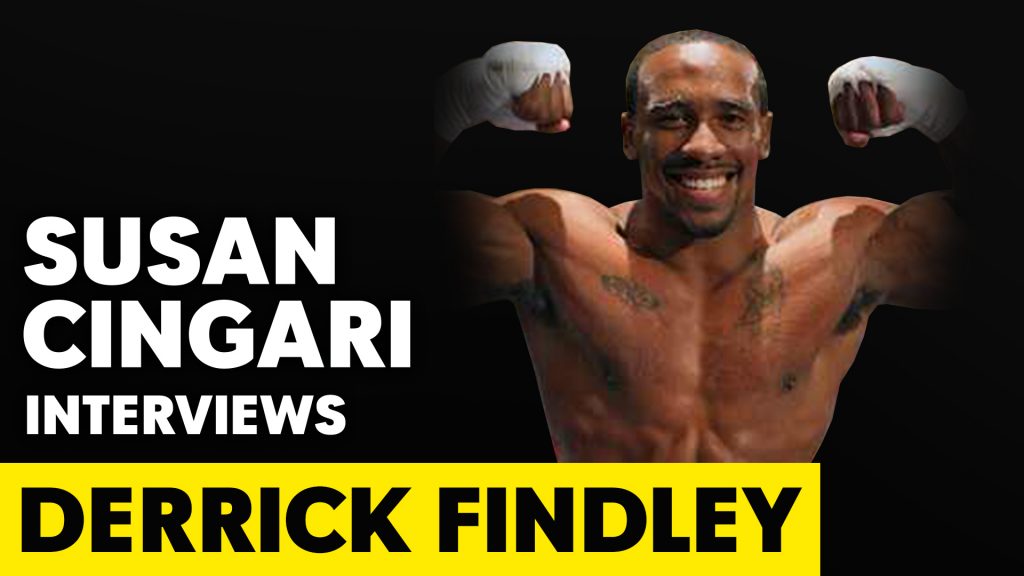 “BKFC is going to be the next BIG thing! … Bare Knuckle is a connection of MMA, boxing, and a street fight… Be ready for me, I’m coming to make some noise, planning to get things shaken up at BKFC!”

Listen to the interview:

Susan: Thank you so much for taking the time. So we last saw you at the tryouts in Lakeland. Let’s talk a little bit about that and how that led to your signing.

Derrick: Well, like I said, they just wanted to see me, let my hands go, you know, see what I can do a little bit. And I showed everybody that I can do my thing. And I got the sign and then I’m blessed, happy to be here.

Susan: While you were at the tryouts, what were your thoughts about some of the other fighters that were there talent-wise?

Derrick: Well, like I said, I wasn’t really paying any of them any attention. It just seems like KFC is going to be the next big thing, and I’m just looking forward to it. No, I just can’t wait to do it. But as far as, like, the talent stuff that I didn’t really pay anybody any attention.

Susan: What excites you about bare knuckle fighting championship?

Derrick: Well, it is something different – number one. You know, I’ve been boxing for a long time. You know, I’m ready to try something new. I want to test myself. And it just seems exciting. And not only that, it seems like it’s a connection of MMA, boxing and even street fight. It’s like an all of good old fashioned street fight, just a little technical skill to, so, you connect with all people, people from all over, it’s a good connection.

Susan: I could not agree more. And the original fighter, James Sullivan, was surely an example of that. You know, training for bare knuckle is a little different. Talk to us about how you are changing up your training to fight bare knuckle style.

Derrick: Well, I’m sticking to my boxing skills as far as like because that’s just my style, period. I like to brawl and I like to get in there and get close and fight. Well, one of the biggest things is, you know, learning how to getting used to hitting without the gloves and knowing that I can’t block, the way I block with a boxing glove. I got to move my head a little more, just things like that, simple stuff, hitting a bag without gloves, doing those types of things.

Susan: What about working the clinch? Because that is such a big part of bare knuckle fighting championship.

Derrick: I get asked about it a lot. I’m not really worried about it. I’m not thought about it all. If you look at some of my videos, I’m good. I’m known for fighting inside the clinch. You know, they actually do that in boxing. You know, you’ve got certain referees, they allow people to fight out of a clinch. So it won’t be that big of a change for me. So it’s not like I’m going to be looking to be saved by a referee thing if a guy decides to grab me and they want to punch, you know, let’s do it.

Susan: Let’s do it, baby. Spoken like a true legend in boxing. How would you describe your style then?

Derrick: I guess I’m a come forward, come forward brawler. I got a little bit more technical skills that I’m given credit for when it comes to boxing. But yeah, I’m a come of my brawler. People are definitely going to enjoy watching me, I guaranteed I’d never disappoint.

Susan: So I know you don’t have an opponent yet, but have you given any thought to when you start in bare knuckle fighting championship, what would be the keys to victory for you in a fight

Derrick: Never one – be first, that’s like the number one thing. Be first, let my hands fly. Try not to load up too much because I don’t want to crush my hand. But like I said, that’s not a worry of my you know, just like I said, just be first, stay busy and put on a show.

Susan: Put on this show. It’s funny you mentioned your hands because some of our fans are new to bare knuckle fighting championship. And I want you to talk a little bit about this strategy, because I feel like this sport is a little more strategic because you don’t have gloves on. You have to really kind of work with the strategy. Would you not agree with that?

Derrick: I definitely agree with you. You got to have a better placement, better place than with your punches. You can’t just swing recklessly, like in the guy on the top of the head or the forehead, things like that, you know, you can break and stuff like that.

Susan: What makes you a dangerous fighter?

Derrick: One, my IQ and I have a lot of punching power, I’m a big puncher. So like I said, you better keep your hands up. Other than that, you’re going to sleep.

Susan: Have you thought about who you might want to fight?

Susan: You know I was talking to Chop Chop Corley earlier this week and Leonard Garcia and they both told me that they felt like their career was reinvigorated because they felt the same passion they had when they had early on when they started Chop Chop in boxing and Leonard in MMA, how does that work with you mentally? Are you excited?

Susan: Which fight in boxing are you the proudest of and why?

Derrick: Oh, well I went over to Denmark, I went overseas and I beat like an undefeated guy that was really, really popular and big out there. And I beat him, maybe crowd get real quiet. I was very excited because up from what I was told, a lot of times you go overseas, you don’t get the win. They usually give it to the hometown, the hometown guy. And I took care of business and I came out on top.

Susan: How do you prepare mentally for a fight?

Derrick: Yeah, just staying away from people that’s going to take you away from what you are, what your task is. As far as like getting the job done and the fight, just staying calm, of course, getting in the best shape of your life. But really just having positive vibes keep in keeping good people around you. Nobody’s going to take you out of what your task is, you know what I mean? So I’m really good at that distancing of myself and just focusing on what I got, I just do my thing. Stay away from the negativity.

Susan: Speaking of having supporting people around you. Are you train you with your same camp for Bareknuckle FC?

Derrick: I’m basically I’m still sparring with the same boxing stuff. I may get a few of MMA guys or two here and there. I got plans on working out with that. I haven’t got the opportunity to do it yet. I’m going to contact Steve Colon. Yeah, I’m going to start work with him a little bit and have him show me some of the techniques because I know it’s different things that they might do at BKFC. As far as like from boxing, you know what I mean? So, you know, I’m just a sponge, I’ll learn it all.

Susan: I love that. That’s so cool. Before we go today, Derrick, is there anything else you would like to add?

Susan: Well, we are ready to see you in the squared circle. All right. Before we go today, I want to thank Kevin Smith from Smith Brothers for setting up this interview. Derrick, I’ll be looking forward to seeing you fight in BKFC soon.

Derrick: Absolutely. I appreciate it.

Susan: Huge thanks to Derrick Finley for taking the time to interview with me today, helping the lab share this video like and please subscribe. Oh, so you can leave a comment below. I’m Susan Cingari for Bareknuckle News. And remember, no one beats us to the punch.